At Commencement, new lawyers are challenged to protect democracy

“It’s tough to make predictions, especially about the future.” Yogi Berra’s words, as quoted by interim Dean James A. Gardner, formed the backdrop for the School of Law’s 128th Commencement.

The May 21 ceremonies sent 157 new graduates forth into a rapidly changing world – one, as Gardner noted, where “the need for legal services is greater than ever.”

That demand, he said, is for higher-order thinking than any computer algorithm can produce. “We need real, well-trained, flesh-and-blood human beings who possess sound judgment and who live in their own communities; who can identify the abuse of power when it occurs; who can give voice and substance to the rule of law itself,” he said. “We need human judgment informed by actual lived experience.”

The afternoon’s keynote speaker, New York Lt. Gov. Kathy C. Hochul, said she had given many commencement addresses to undergraduates, but never before to new J.D.s.

“I have a very different message for you,” she said. “You are sworn to uphold the Constitution of the United States of America. You are no longer a bystander in democracy, you are sworn to protect it.

“So I’m calling on you to protect the people who live under that democracy. You now have a credential that is beyond the reach of most Americans. You’re held in esteem for what you’ve achieved. You literally possess the power to change people’s lives. Use that power, your intellect, your UB training in the law as swords of justice, whether it’s in your daily practice or your pro bono work. You can give hope to the hopeless, for you may be the only hope they have. “The more you can do for other people, the better person you will become.”

Delivering the student address, graduating senior Ashmita Roka ’17, a native of Nepal, remembered how overwhelmed she felt as she and her classmates began their law school careers. “I didn’t know how to figure out the relevant facts,” she said. “They all seemed completely relevant to me.”

What she learned, she said, was that “it was OK to have bad days, but the important thing was to show up and get things done. … We all had an idea of who we were before law school. We were left with the ultimate choice: to overcome our obstacles, our personal battles, and to face them with courage and to rise above it. And today is a testament that we all rose above it.”

A highlight of the ceremonies was the presentation of the UB President’s Medal to Francis M. Letro ’79, chair of the University at Buffalo Foundation and a longtime, active supporter of the School of Law. Letro accepted the medal from UB President Satish K. Tripathi and, in brief remarks, encouraged the graduates to use their skills for the greater good. “A lawyer can always, always, always improve a situation,” he said, “no matter how dire that situation might seem at first.”

Christen E. Civiletto, an adjunct faculty member at the law school, was presented with the Ken Joyce Excellence in Teaching Award. Civiletto is an attorney and author of Green City Savior—an environmentally themed suspense novel set in Niagara Falls, N.Y.

Additional awards presented during the ceremony included the Staff Award given to Dawn Skopinski and the Faculty Award, given to Professor S. Todd Brown. 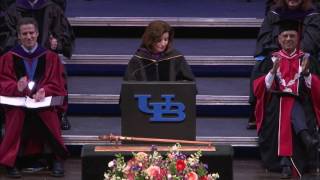