The Distinguished Alumni Awards are given in six categories: the judiciary, private practice, public service, community service, business, and service by a non-alumnus. They are traditionally presented at the Annual Law Alumni Dinner. 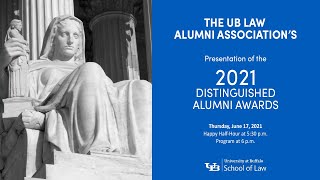 For the Judiciary: Hon. John J. Ark ’72, former justice of the New York State Supreme Court, Seventh Judicial District, in Rochester, N.Y. where he presided over all of the Court’s toxic torts cases until 2020. During his time on the bench, Ark served as supervising judge of the Seventh Judicial District’s matrimonial part where he oversaw the disposition of nearly 10,000 divorce cases. He now serves as a NYS Judicial Hearing Officer. Prior to his election to supreme court, he was a solo practitioner. He also served as a town justice in Brighton, N.Y. for approximately 14 years, and as an assistant district attorney for Monroe County. While a law student, he was the managing editor of the Buffalo Law Review.

For Private Practice: David R. Pfalzgraf, Jr. ’97, managing partner of the Buffalo-based law firm Rupp Baase Pfalzgraf Cunningham LLC. Founded in 2000 by Pfalzgraf and two of his colleagues, the firm now has over 60 attorneys in five offices located across New York State. Pfalzgraf leads the firm’s business law practice group, working primarily with private business enterprises ranging from closely-held family businesses to multi-national corporations. He has been recognized by Buffalo Business First and the Buffalo Law Journal as a member of the “Legal Elite of Western New York” from 2013 through 2020.

For Public Service: John J. Flynn ’95, Erie County District Attorney. Flynn has dedicated his career to public service including several years in the U.S. Navy as an officer and as a litigation attorney assigned to the Navy’s Office of the Judge Advocate General’s Corps (JAG) in Washington, D.C. He has also served as an assistant district attorney for Erie County, an acting Buffalo City Court judge, and in several public roles for the Town of Tonawanda, N.Y. including town justice, town attorney, and as a member of the Tonawanda Town Board.

For Business: Paula M. Ciprich ’85, recently retired from National Fuel Gas Company in Williamsville, N.Y. where she was senior vice president and general counsel. Ciprich was responsible for audit services, human resources, payroll, corporate legal, risk management and security. Over the course of her career at National Fuel, she managed multiple departments and business functions including quality assurance, investor relations and government relations. From 2008 to 2018, she served as secretary of the company. She has been listed annually by Buffalo Business First among the “Top 125 Most Powerful Women in Western New York.”

For Outstanding Service to the University and the Community by a Non-Alumna: Hon. Shirley Troutman, associate justice, New York State Supreme Court, Appellate Division, Fourth Judicial Department. Appointed by Chief Judge Janet DiFiore, Troutman is the co-chair of the Franklin H. Williams Judicial Commission, responsible for developing programs to improve the perception of fairness within the court system and to help ensure equal justice in New York State. Prior to beginning her judicial career in 2002, she served as an assistant district attorney for Erie County, an assistant attorney general for the State of New York, and an assistant U.S. attorney for the Western District of New York.