As the School of Law broadens and deepens its commitment to diversity, equity and inclusion, the UB Law Alumni Association is supporting those efforts—raising awareness through alumni programs and inspiring positive action.

The association’s Social Justice and Racial Equity Committee, chaired by community leaders Heather Gresham ’96 and Crystal Rodriguez-Dabney ’06, is looking to foster a practical understanding of these critical issues, giving alums the tools to work toward change in their firms and their communities.

This spring, that has taken the form of two virtual presentations. “Microaggressions in the Workplace: Recognizing and Overcoming Our Biases” addressed how unconscious assumptions and behaviors poison a working atmosphere and impair people’s job performance. “Allyship at Work,” with Western New York psychologist Dr. Ursuline Bankhead, explored how to become an ally for people of color both at work and in the wider community.

“We’re trying to get beyond diversity,” says Rodriguez-Dabney. “It’s not just numbers. It’s really educating our colleagues about true equality and inclusion and what that means. It’s about the culture in your workplace and the legal field in general, and how there are some things we need to address to create a space of inclusion.” 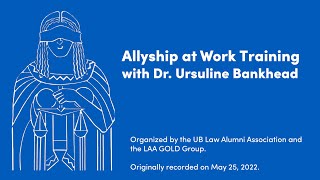 In that new role, she has been part of the city’s response to the May 14 tragedy at the Tops supermarket on Jefferson Avenue in Buffalo, where a gunman killed 10 people and wounded three others. The U.S. Department of Justice is investigating the mass shooting as a  racially motivated hate crime.

“No one gives you a manual on how to respond to this,” Rodriguez-Dabney says. “This was somebody who invaded our community and did so specifically to target as many African-Americans as possible. My community has a right to be angry at that, but we have had not one window broken, not one riot, not one building set on fire and for that I am proud. I’m also proud of the mayor’s response and the way he has represented the city. He provided a sense of calm in addressing the crime immediately.”

But the emotional toll on everyone involved has been great. “People look at administrations sometimes almost not seeing the human factor,” Rodriguez-Dabney says. “But we knew a lot of the victims. And I have a 12-year-old—I need to make sure she is processing this.”

For leaders like Rodriguez-Dabney and Gresham who are working to combat racism by changing attitudes, including in the workplace, its imperative that we create more opportunities to build a more inclusive and welcoming culture. “That has to come from the top,” Rodriguez-Dabney says. “It’s not, ‘If it’s not broke, don’t fix it.’ It’s saying, ‘This is our culture, our mission, our core values,’ and then implementing them and acting in a way that reflects that.”

Gresham, her co-chair on the Social Justice and Racial Equity Committee, brings that philosophy as well to her role as counsel and vice president for people and culture at the nonprofit organization RepresentUs, which works to pass state and local anti-corruption laws in order to reduce the influence of deep-pocket lobbyists.

Gresham leads all human resources for the group, which comprises about 60 people. “My role has a lot to do with shaping our culture,” she says. “I am passionate about this work, and it was the right position at the right time for me.”

She chairs the organization’s DEIB Council, covering diversity, equity, inclusion and belonging, “which  advances initiatives that promote DEIB across our organization and ensures  that our policy decisions are considered through that lens. We want to ensure that the work that we do across our organization really provides the space for people to thrive, and in order to do that, they have to feel like they belong.”

Gresham brings that expertise in culture-building to the Law Alumni Association committee, looking to share best practices for legal employers. “If you are considering how to transform your organization so the people who work there can thrive, these are issues that you need to understand,” she says. “The work of Diversity, Equity, and Inclusion is for everyone. None of the work that is done in any space is intended to say anything other than we need to build the table longer, to make room for everyone at the table. It’s not taking anything away from someone for someone else—we’re advancing equity. And for too long, that hasn’t happened.”