Law school extends conversations and interpretations after the overturning of Roe v. Wade

On July 6, UB’s School of Law held a panel discussion titled Deconstructing Dobbs on the meaning and implications of the Supreme Court’s decision to overturn the landmark Roe v. Wade decision that guaranteed reproductive rights to women.

“When the Supreme Court announced its decision in Dobbs vs. Jackson Women’s Health Organization just a week and a half ago, it was a devastating blow to many, despite the fact the opinion had been leaked and we knew that a major setback to the rights of people to make personal decisions about their health care was imminent,” said School of Law Dean Aviva Abramovsky in her introductory remarks at the virtual panel discussion.

“With the release of the decision, we can see that the implications of the court’s ruling are far-reaching and extend beyond the overturning of Roe vs. Wade.”

The five panelists — all members of the law school faculty — expressed a range of views about the Supreme Court’s decision and its impact on other rights and laws, including contraception and same-sex marriage. The panel reviewed the court’s rationale for its majority decision and its reference to history and addressed New York’s legislative efforts to blunt the effects of the ruling. 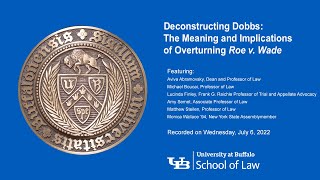 Lucinda Finley, the School of Law’s Frank G. Raichle Professor of Trial and Appellate Advocacy, began the discussion with a brief summary of the 200-plus page decision, citing the court’s reference to previous decisions including Roe v. Wade as “egregiously wrong” and “deeply damaging” because they limited the options of people opposed to abortion.

“They also said don’t trust that the majority won’t wind up overruling all these other rights,” Finley said. “(The majority) was being intellectually dishonest because all those other rights are part of the same Constitutional fabric, and not a one of them is deeply rooted in history. In fact, many of them have been illegal for longer than abortion was illegal.”

Later in the session, Finley addressed the decision's impact on reproductive health care, noting that a majority of states are likely to ban or restrict abortion, with several states looking to prohibit women from traveling or residents of other states providing information or financial assistance — prohibitions that could violate rights to travel and free speech.

Matthew Steilen, professor of law, discussed the Constitution’s 14th Amendment due process clause, which prohibits states from depriving any person of “life, liberty or property” without due process of law, and spoke on whether other rights protected under this due process clause — such as contraception and interracial marriage — could be threatened.

“We have to be sure to distinguish what the Court said from what it did,” Steilen said. “There are ways of reading these principles that would imply that the Court’s decisions in cases it expressly distinguishes from Roe are also faulty.

“My takeaway is to remember what the Court says in Dobbs …,” Steilen said. “I think some of the language in light of what it did leaves room to breathe.”

Michael Boucai, professor of law and an expert on gender equity issues and sexuality and the law, discussed the ruling’s possible impact on rights to contraception, sexual liberty and same-sex marriage.

Boucai cited the dissent opinion by Justices Breyer, Kagan, and Sotomayor: "Either the mass of the majority’s opinion is hypocrisy, or additional constitutional rights are under threat. It is one or the other.”

Boucai said those who support reproductive rights and related issues should be very concerned.

“We do have some reason to worry,” he said. “We have a Republican party today that is increasingly . . . emboldened, especially with respect to the judiciary. We have Republicans constantly looking to outdo each other in state houses and in Congress in terms of conservative legislation, especially on ‘social' issues.

“So I think there really is cause for alarm, if not in the very short term, in the medium term. It’s alarm, not panic.”

New York State Assemblywoman Monica Wallace, a 1994 graduate of the UB School of Law and a member of its adjunct faculty, discussed recent efforts by the state Legislature to ensure that reproductive choice and access to contraceptive care remain protected in New York. Wallace warned, however, that New Yorkers should not be complacent because some state lawmakers are seeking to repeal existing protections and make abortion illegal in New York.

“The idea that somehow we are comfortable in New York is misguided,” said Wallace.  “We cannot be complacent.”

Amy Semet, associate professor of law, examined the perceived legitimacy of the Supreme Court and public reaction to the Dobbs decision. Semet said the confidence level among the public in the Supreme Court has dramatically declined, 11% in the past year.

“The year 2024 could be a defining moment,” Semet said. “Will the Supreme Court make opinions that will be out of line with the majority of what the American public believes? Will that further decrease the legitimacy of the court, especially if they were to rule to extend Dobbs, as Justice (Clarence) Thomas would have it, to things like birth control and gay marriage?”

Abramovsky said the School of Law’s faculty has been at the forefront of gender equity and reproductive rights and justice issues for many years, and she encouraged anyone interested in supporting their efforts to reach out to the law school.

“This is but the first of many panels,” she said.