Held in the nation’s center of political power, the presentation of the 2022 Edwin F. Jaeckle Award to Judge Paul L. Friedman '68 drew remarks from the highest echelons of the bench and bar—including past presidents of the American Bar Association, a national legal affairs correspondent, a former deputy attorney general for the United States, the chief judge of U.S. District Court's D.C. Circuit and our newest U.S. Supreme Court justice.

It was the first time the Jaeckle Award—the highest honor bestowed by the School of Law and the UB Law Alumni Association—was presented in Washington, D.C. The event celebrated the distinguished career of Judge Friedman, who has served as a U.S. District Court judge for the District of Columbia for over 27 years. Prior to his appointment to the bench, Judge Friedman was a partner in the international law firm of White & Case and the managing partner of its Washington office.  He has also served as Assistant U.S. Attorney for the District of Columbia, assistant to the Solicitor General of the United States, and associate independent counsel for the Iran/Contra Investigation.

Via both live and video remarks, colleagues paid tribute to Friedman, whose tenure in the busy D.C. circuit has included several high-profile cases and whose judicial career has been marked by significant initiatives to improve access to justice and to diversify the federal bench.

“When we think about what it means to serve justice, we think of fairness and integrity and ensuring equal protection under the law,” law school Dean Aviva Abramovsky said at the June 15 presentation. “Judge Friedman has devoted his career to those ideals… We are very, very proud of him.” 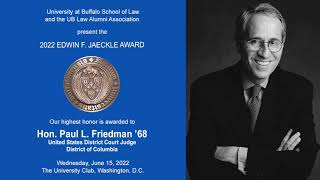 Speakers at the event highlighted Judge Friedman’s 20-year stewardship of the case of John Hinckley Jr., who shot President Reagan in 1981; the judge oversaw an incremental path for Hinckley to leave federal custody. They also cited the 1999 case Pigford v. Glickman, a class action lawsuit against the Department of Agriculture for decades of discrimination against African-American farmers who were denied federal farm loans on the basis of race. The case was resolved with a $2 billion consent decree, and Judge Friedman eloquently wrote: “Nothing can completely undo the discrimination of the past or restore lost land or lost opportunities to all of the African-American farmers whose representatives came before this court. Historical discrimination cannot be undone. But the consent decree represents a significant first step.”

Friedman was also commended for his activist work including organizing a major and continuing effort by the D.C. bar to provide legal services to people experiencing homelessness, a model that the judge then expanded nationwide; and his early and vigorous advocacy for racial and gender diversification of the circuit court bench. The high-profile guests, including Hon. David S. Tatel, United States Circuit Judge for the U.S. Court of Appeals in the District of Columbia, also praised Judge Friedman’s cogent and impeccably written decisions, with their elegant summation of the fact pattern and careful reasoning of his finding.

Among the other speakers was newly confirmed U.S. Supreme Court justice, Hon. Ketanji Brown Jackson, a protegee of the judge.  (She was sworn in to our nation's highest court just a couple of weeks after the event.) “Few people know this, but Judge Friedman was among the very first people to encourage me to seek judicial office,” the justice said in her video remarks, “and I was privileged to serve alongside him on the district court for the District of Columbia for over eight years, during which time he was a fabulous colleague and friend, always giving the best advice, exuding good humor, care and the utmost concern for the well-being of his colleagues. I always looked forward to visits to his chambers both because he is such a good listener and because those visits gave me a chance to admire his chambers’ decor. He has impeccable taste, and I confess that I mirrored some of his chair choices when outfitting my own chambers on the circuit court.”

In his remarks, Judge Friedman mused about the path of his career and concluded with some life advice.

“Lawyers and judges focus so much on their daily lives, their daily work, their clients, their cases, their trajectory,” he said. “But we are not just practicing law, we are much more importantly living our lives. We need to surround ourselves with people we like, with people we respect, people we can trust, people who will support us and who we can turn to in both the good times and the tough times as well as those whom we want to support.

“The mundane, the ordinary, the private moments, the interpersonal, the joys, the annoyances—these thousands of small things are what day-to-day existence consists of and in the end are what really matter. Our lives are not just mountaintops we occasionally reach or attempt. Our lives consist of our attempts to be good people and to find satisfaction -  both professional and personal. So each of us needs to find not only the right circumstances in which to live our best lives but the right people with whom to live it.”