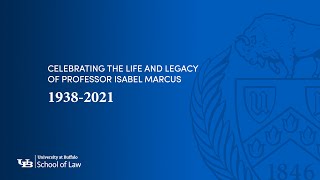 On Wednesday, May 11, 2022, the University at Buffalo School of Law and the UB Gender Institute celebrated the life and legacy of Prof. Isabel Marcus, an internationally recognized champion for human rights.

A native of New York City, Professor Marcus attended Barnard College and the London School of Economics. She then went on to the University of California-Berkeley, where she earned a J.D., a master’s degree in African studies, and a doctoral degree in political science.

After teaching law and public policy at the University of Texas-Austin, she joined the UB Law faculty in 1982 where she taught for more than 35 years. Initially, she focused her teaching and scholarship on labor and family law, expanding to women’s rights and gender equality issues, domestically and abroad.

In 1997, she co-founded UB’s Institute for Research and Education on Women and Gender (now the Gender Institute) and served as chair of the Women’s Studies program at UB from 1997 to 2002.  During her academic career, she received two Fulbright Scholar Awards and was named an International Scholar for the Open Society Foundation’s Institute for Higher Education Support Program in Eastern Europe. She taught extensively at universities throughout the world, particularly in Eastern Europe and Asia.  She retired from UB in 2019.

Former Dean and Professor Emeritus Barry B. Boyer remembers a scholar fearless in her commitments. He recalls, “During the ’90s, she taught a course with the provocative title ‘Terrorism in the Home.’ It was both an exploration of the prevalence of domestic violence at a time when the legal system did very little to protect victims, and a serious exploration of the ways in which we humans can use fear in an effort to control and degrade others.

“Isabel also took her commitment to preventing and remediating domestic violence to Eastern Europe as the region was opening up to western ways with the collapse of communism.  A lot of her work was centered in Poland, where her family lived before emigrating to the U.S. ahead of the Holocaust.

“In addition to assisting groups that were trying to establish women's rights, Isabel worked with colleagues at Jagiellonian University Law School in Krakow to create an innovative joint human rights seminar.  U.S. and Polish students were paired for a year-long collaborative effort. UB Law students went to Krakow at the beginning of the academic year and set up collaborative human rights research projects with Polish counterparts. Polish students came here toward the end of the academic year to participate in presenting their joint research projects. It was a very dramatic illustration of the power of people-to-people learning and international understanding.”

Unfortunately, due to a technical issue, the beginning of the ceremony including welcome remarks by Dean Aviva Abramovsky, School of Law; and Prof. Carrie Tirado Bramen, director of the Gender Institute, were not recorded. Read their remarks below:

Donations may be made to the Dr. Isabel S. Marcus Fund for the Domestic Violence Clinic or by mail to the UB Foundation, PO Box 730, Buffalo, NY, 14226.

Marcus during her early years at UB Law

Adds former Dean and Professor Emeritus R. Nils Olsen Jr.: “One of my joys was working with Isabel to develop a series of courses for students to accompany her to Eastern Europe to study domestic violence in a range of nations, most memorably in Kosovo shortly after the brutal ethnic cleansing perpetrated by Serbia. Many of our best students took advantage of the courses and of Isabel’s deep familiarity with the Eastern European nations they studied. She was one of the most effective and committed non-traditional law teachers at UB. She was an excellent colleague, and she will be missed.”

Clinical Professor Judith Olin '85, director of the law school’s Family Violence and Women’s Rights Clinic, credits Professor Marcus for encouraging her to apply for the clinic directorship and for her impact on the careers of many future advocates and activists.  “In her years as a professor at the law school, Professor Marcus greatly influenced and inspired law students, many of whom went on to pursue careers in public interest law, advocating for underrepresented clients,” says Olin. “She brought her remarkable lived experiences to the classroom, as a litigant in gender discrimination and divorce cases, and as an international activist for gender justice.  Many do not know that Professor Marcus was one of the only women who co-facilitated batterer’s intervention groups for men who were court-mandated to attend.

“As director of the family law concentration, in 2017, she convened a work group to evaluate and make changes to the concentration, at a time when her health was failing.  This led to the inclusion of new courses, adding an experiential component, and strengthening the law school’s ties with experienced family law practitioners. Her impact on lawyers, scholars, and activists will live on for many years to come."