Like other well-intentioned progressives, legal advocates for residents of poor Black neighborhoods face a persistent accusation: that their efforts hurt the very people they mean to help. Disputing this charge, Professor Kennedy proposed a method for evaluating a wide range of legal reform projects. 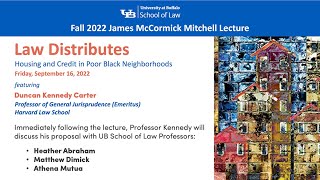 About our Featured Speaker

Duncan Kennedy is the Carter Professor of General Jurisprudence, Emeritus, at Harvard Law School. One of the founders of the Critical Legal Studies movement, his scholarly work is widely recognized for its influence on the history of legal thought, legal semiotics, law and economics, contract law, and legal education.

Kennedy joined the Harvard Law School faculty in 1971 after completing a clerkship with U.S. Supreme Court Justice Potter Stewart. At Harvard, he has taught contracts, torts, property, trusts, the history of legal thought, low-income housing law and policy, Israel/Palestine legal issues, the globalization of law and legal thought, and the politics of private law.

His work includes five academic books, numerous articles, and contributions to public debates on the war on Iraq and Israel/Palestine in journalistic writings and beyond.

The Mitchell Lecture Series was endowed in 1950 by a gift from Lavinia A. Mitchell, in memory of her husband, James McCormick Mitchell. An 1897 graduate of the Buffalo Law School, Mitchell later served as chairman of the Council of the University of Buffalo, which was then a private university.

Justice Robert H. Jackson delivered the first Mitchell Lecture in 1951, titled "Wartime Security and Liberty Under Law." The lecture was published that year in the first issue of the Buffalo Law Review.