The Edwin F. Jaeckle Award is the highest honor the University at Buffalo School of Law and its Law Alumni Association can bestow, presented annually to a person who brings honor to the school and to the legal profession.

Our 2021 Award was presented posthumously to Hon. Hugh B. Scott '74, former U.S. Magistrate Judge for the Western District of New York and a longtime champion of equal access to the justice system. 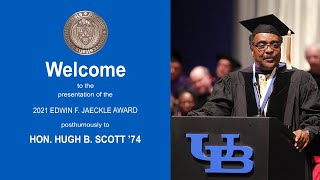 Give to the Memorial Fund
View Past Jaeckle Award Winners

Judge Scott spent more than three decades on the bench, stepping down as an active U.S. magistrate judge in 2015. The first African American to serve as a federal judge in the Western District of New York, he continued in semi-retirement to hear a reduced caseload until his recent passing in February of this year.

His judicial career began when he ran for Buffalo City Court judge in 1984 and was elected to a 10-year term, then re-elected in 1994. He left that position in 1995 to ascend to the federal bench.

Judge Scott created the U.S. District Court’s Re-entry Court, in which convicted defendants who have served their sentence receive job training, legal assistance, and other help to ease their transition back into society. He served as a role model and mentor for countless law students and practitioners and held numerous leadership roles in Buffalo community organizations, including Niagara University, Canisius College, Buffalo Urban League, the New York State Judicial Task Force on Domestic Violence, Sisters of Charity Hospital, the National Federation for Just Communities of WNY, and many more.

Throughout his career, Judge Scott remained active and engaged with the law school. He was a member of the Dean’s Advisory Council and also served UB Law as an adjunct professor, teaching trial technique courses for both the J.D. program and the criminal law and general Master of Laws programs. He presided over the first federal court trial held in the law school's Francis M. Letro Courtroom.