If you’re looking for the ideal way to teach a broad range of legal skills and subject areas, you needn’t look any further than sports law.

Contracts. Negotiation. Intellectual property. Employment law. It’s all in there.

It’s this kind of holistic focus that makes sports law an engaging way to learn how lawyers work. And it’s the impetus for UB School of Law’s newly established Center for the Advancement of Sport, a major interdisciplinary effort that incorporates high-level teaching and research, public education and policy advocacy.

“We’ve got these tremendous resources in the university,” says Helen “Nellie” Drew ’88, who directs the new center – the first of its kind in the nation. “Why not bring people together so our students get exposure to a very broad cross-disciplinary framework instead of doing things in a vacuum?” 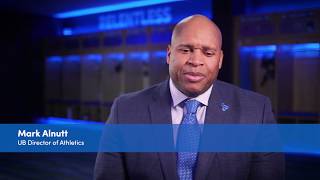 Watch a video that highlights the Center for the Advancement of Sport.

Drew, who teaches most of the law school’s sports law courses, says the field lends itself to developing critical thinking and analytical skills, given that there’s no specific body of black-letter law that covers every sports-related issue. “A lot of my teaching is based on getting students to interact with real-world scenarios,” she says. “It’s very rarely a simple legal question. Often we get into law and pharmacy, law and medicine, law and education.”

And because the law school is part of a major public university, students have an invaluable resource: UB’s Division of Athletics, which includes 16 NCAA Division I intercollegiate teams, both men’s and women’s. “We have a very large, very well-run sports business on campus,” Drew says. “There’s no better example of a community of law.” That means opportunities for law students to learn about regulatory compliance – including NCAA, SUNY, state and federal laws – and gain valuable exposure to a high-level amateur sports organization.

As the Center for the Advancement of Sport grows, one goal is to establish UB and the law school as national leaders in this field – enhancing our nationwide reputation and drawing talented students who likely already know Buffalo as a great sports town.

UB School of Law now has a concentration in sports law, and it’s adding to its teaching roster. In addition to Drew, Jonathan A. Dandes – president of Rich Baseball Operations, which runs the AAA Buffalo Bisons – and former Buffalo Sabres player and executive vice president  Gerry Meehan ’82 will teach sports law courses beginning this fall. Dandes’ course covers marketing issues in sports law; Meehan will teach a course in salary negotiation and arbitration.

“The whole point is to take advantage of our connections in the sports industry,” Drew says, and thus build relationships that will open doors for our students as they seek out externships and future employment.

Says Meehan, who also serves as special counsel to the center: “We want to reach across the border to attract Canadian lawyers and students to the program. We have all the major sports leagues represented in the Toronto-Buffalo corridor, and we’ll reach out to those organizations” to create practical-skills externship opportunities in areas including operations, financial, planning, immigration and cross-border issues.

In addition, Meehan says, he’ll work to build relationships with University at Buffalo academic units at both the undergraduate and graduate levels, and with university departments including athletics, finance and facilities.

“I’m intrigued by the idea of getting involved in a practical approach to study,” he says. “We will not only participate in teaching students how to think like lawyers and graduate students, but also how to access job opportunities in the industry. That’s what excites me.”

Marc Davies ’03, the law school’s associate director for career services, says in-house counsel departments, including in the sports and entertainment industry, are increasingly looking to hire legal interns. The new center, he says, likely will increase those opportunities – “It will engage students who have a love of sport and now are pursuing a professional career, and bring those two things together. We’ve already seen outcomes from Prof. Drew and Gerry Meehan’s enthusiastic efforts including externship placements with the Buffalo Bills organization.”

That includes new graduate Stephen Papia ’19, who worked throughout his 3L year as a law clerk with the Buffalo Bills.

“I’m a big Bills fan and sports fan in general, and this seemed like a unique opportunity,” says Papia, who completed the sports law concentration as a law student. Papia had previously worked with the in-house legal department of New Era Cap Co., the sports headwear company. “It was a lot of transactions, contracts, intellectual property, trademark issues,” he says. “It was pretty translatable” to the Bills position.

With the football team, he did legal research including looking at implementing an easy-renewal system for season ticket holders; examined sponsorship agreements with such companies as Gatorade and Coca-Cola; and developed a system to help the attorneys keep track of contract dates, dollar figures and other important provisions.

“There’s not really a sports law area of practice,” Papia says. “It’s many different areas of the law that apply to the sports industry. Employment law, IP and trademark issues, personal injury concerns – they’re all framed in the sports world.”

It’s that kind of generalist ability that Drew sees as a strength of sports law, in an industry that encompasses areas as broad as newly legalized sports betting, drug testing and sexual harassment.

“The whole idea is not to pigeonhole people,” she says. “We want to make sure our students have rich, hands-on learning experiences and come out of UB absolutely qualified to assume many of the new jobs that are being formed in the sports industry. I can’t tell you where the industry will be in 10 years. But the opportunities are phenomenal.”