The Charles S. Desmond Moot Court Competition comprised nine two-person teams that endured four rounds of arguments over three days. Third-year student MacKenzie Hamill ’21, president of the Buffalo Moot Court Board that hosts the competition, says close to 50 alumni and other friends of the law school took part as judges. Every round included a panel of three judges. 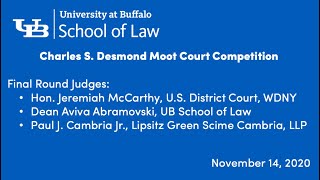 Watch the final round of the 2020 Desmond Competition.

“There were a lot of moving parts,” Hamill says, “but we were able to make it work. We have a great board.  All of our judges and volunteers, as well as the competitors adapted well to competing online.”

The Desmond Competition Committee – students Rebecca Valentine ’21, Adam Amirault ’21 and Nichole Austin ’21 – drafted the problem, with guidance from Professor Lucinda Finley, and wrote a bench brief for the judges.

The winning team, Daniel Caves ’21 and Patrick Callahan ’22, were also recognized for Best Brief. They argued against the team of Canio Marasco ’22 and Marc Cange ’22 in the final round on Nov. 14, before a bench consisting of Hon. Jeremiah J. McCarthy, Dean Aviva Abramovsky and attorney Paul J. Cambria Jr. In another Desmond Competition first, the final arguments were live-streamed. (Watch a recording of the final-round arguments here.)

Part of the challenge, Callahan notes, is having to argue both sides of the case, for the petitioner and the respondent, after having written a 40-page brief for just one side. The winning team argued off-brief twice.

“We were coming from one perspective.  In our brief, we tried to spin the cases that were not as favorable to us, to minimize their impact,” he says. “But we knew we’d have to argue the other side, too, and it helped to think about both perspectives. You think about what your weaknesses are. It helped us do better than we expected.”

For his partner, the experience of writing the brief helped shape the oral arguments they made. “When you’re writing the brief, you’re doing a lot of your thinking ahead of time,” Caves says. “It’s a good way to anticipate the arguments you know you’re going to make.”

And to anticipate the judges’ questions. Caves says the competitors faced a hot bench in the final round. “You could hardly get a word in edgewise,” he says. “The judges have their questions ready to go, and they pepper you with them. Each advocate got out about five words before Justice Cambria came storming in with his questions.”

Says Professor Finley, who serves as the law school’s director of appellate advocacy: “I am very proud of the accomplishments of our students and their intellectual growth through participating in Desmond. I read all their briefs, and I judged the semifinal oral round and watched the final round. Their sophisticated understanding of the issues and ability to think on their feet and present thoughtful and compelling oral arguments under intense questioning was most impressive.”